Just because you’re chosen doesn’t mean you want to be.

Nicolas loves his village life just the way it is, everything as it’s supposed to be.

When he’s chosen for a task, he finds himself going out into a world he knows little about and feels completely unprepared for. His only comfort is that all he has to do is deliver a message. That should be pretty simple, right?

One near-death experience later, Nicolas finds himself in a world of heroes, villains, magic, and far too many undead creatures for his liking.

Caught up in events he can’t control, he must—with the strange companions he meets along the way—foil a plot that may destroy his kingdom as he knows it, and maybe even the world.

Thousands of lives are in the hands of someone who’s never even picked up a sword…but at least he knows not to hold it by the pointy end. 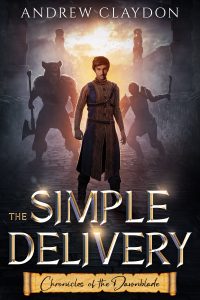 There are no reviews yet.

Be the first to review “The Simple Delivery – Ebook” Cancel reply